What Makes Your Stomach Flat

What’s The Best Exercise To Flatten Your Stomach

What Can Cause Intense Stomach Pain

What To Take For Bloated Stomach

What Can Cause Sharp Stomach Pain

What Are Home Remedies For Stomach Ulcers

Soothe The Stomach With Bananas

Bananas can help heal a stomach ulcer by promoting cellular proliferation in the stomach. In addition to this, there are certain antibacterial compounds in bananas that inhibit the growth of ulcer-causing H. pylori. Bananas also help reduce inflammation and strengthen the stomach lining.

A 1986 study published in the Journal of Ethnopharmacology suggests that banana powder treatment not only strengthens mucosal resistance against ulcerogens but also promotes healing by inducing cellular proliferation.

A 2001 study published in the Indian Journal of Experimental Biology suggests that the antioxidant activity of bananas may be involved in its ulcer-protective activity.

In a 2013 study published in Pharmacognosy Research, researchers suggest that the anti-ulcer effect of banana may be due to its antisecretory and cytoprotective activity. The healing of the ulcer base might be connected to the basic fibroblast growth factors responsible for epithelial regeneration in the case of acid-induced ulcers.

Both ripe and unripe bananas are very effective in treating a stomach ulcer.

How About H Pylori

This dangerous spiralshaped bacterium is a common cause of the infection worldwide. H. pylori infection is usually contracted in childhood it may happen through food, water, or close contact with an infected individual. Most people with H. pylori dont display any symptoms until theyre older. In fact, they may go through life unaware that theyre infected. Half of the worlds population has H pylori. Although H. pylori infection usually doesnt cause problems in childhood, if left untreated it can cause chronic infection, gastritis , peptic ulcer disease in 10% of cases, and even stomach cancer in 1%. It may be certain strains of these bacteria are more dangerous than others.1

H. pylori lives and multiplies within the mucous layer that covers and protects tissues that line the stomach and small intestine. Often, H. pylori causes no problems, but sometimes it can disrupt the mucous layer and inflame the lining of your stomach or duodenum, producing an ulcer. To cure H. pylori infection, physicians generally prescribe antibiotics and other drugs that block acid production and increase the bioavailability of antibodies in the gastric mucosa. Proton pump inhibitors also help to stabilize some antibiotics. However, concerns are rising with such conventional therapies in the light of emerging evidence that frequent use of antibiotics for H. pylori infections increases its resistance to antibiotics and damage to the kidneys.

If you suspect you have a stomach ulcer, see your doctor to first rule out other causes of your pain. In order to diagnose a stomach ulcer, your doctor may perform an endoscopy, which allows the doctor to view the inside lining of the esophagus, stomach and small intestine. Once a diagnosis is verified, treatment options can begin.

Your doctor will likely take your medical history and perform a physical exam along with a blood test, plus ask you about your past use of medications and possibly do an X-ray to locate a stomach ulcer. Testing the blood for H. pylori, plus doing a urea breath test and/or stool test to look for the presence of H. pylori antigens, are common ways to diagnose an ulcer.

The goal of stomach ulcer treatments is to help reduce pain and inflammation in the digestive tract, boost the immune system to fight H. pylori bacteria, prevent complications, and lower the chance for future ulcers from forming or returning.

With its powerful antioxidant properties, honey can help in inhibiting growth of H. pylori bacteria. It can help in soothing ulcers and preventing peptic ulcers.

Probiotics can help in maintaining balance of bacteria in the gut. Fermented foods like buttermilk, yogurt, kimchi and kefir are good instances of probiotic foods. 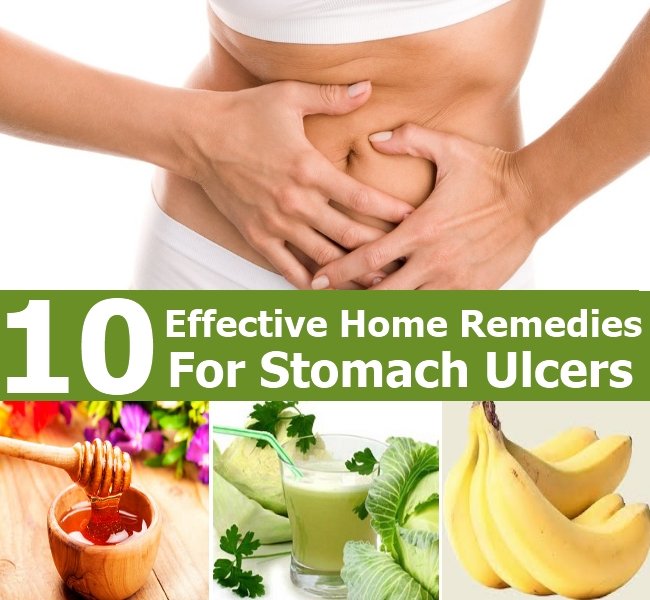 Cabbage is a great remedy for the treatment of ulcers in the stomach.

Being a lactic acid food, cabbage helps in producing an amino acid that stimulates blood flow to the stomach lining. This aids in the healing process.

Plus, cabbage is a good source of vitamin C, which is beneficial for fighting an H. pylori infection.

A 1949 study published in the Western Journal of Medicine found that rapid healing of peptic ulcers was observed radiologically and gastroscopically in 13 patients treated with fresh cabbage juice. This indicates that its anti-peptic ulcer dietary factor may play an important role in the genesis of peptic ulcers.

A 2014 study published in Medicinal Chemistry Research reports that aqueous cabbage plant extract increased the pH value of gastric juice and as such could be used for healing an acute gastric ulcer.

Also Check: How Do You Relieve Stomach Pain

The Pros And Cons Of Pain Relief Drugs

Here’s a rundown of the benefits and risks of some popular pain medications. It should help simplify your choices when you’re in the drugstore.

Keep in mind that you shouldn’t use any over-the-counter painkiller on a regular basis. If you’re in that much pain, you need to talk with your doctor.

According to several studies, licorice is very effective for preventing and treating peptic ulcers. Plus, it also helps speed up the healing process and ease the pain from ulcers. For instant results, you can use it as follows.

Caffeinated drinks, alcohol, and smoking increase stomach acid levels. The result is increased gastric irritation that can lead to ulcers or other gastrointestinal problems. Drinking plenty of water will help dilute the stomach acids in your system as a bonus it helps with many other health issues too.

Coffee and tea may irritate the stomach lining. Drink lots of water to help keep your body hydrated, as it can ease acid reflux. Avoid caffeinated drinks such as coffee or energy drinks which are high in caffeine content thats been shown to aggravate an ulcer- especially if youre having trouble sleeping!

You May Like: What To Do When Your Head And Stomach Hurts

The amalgamation of sodium bicarbonate and fermented apple solution may rather sound eccentric for a few. However, these proponents individually bear several health benefits that could help you cure and control your stomach ulcer.

Why Does it Work?

Baking soda, chemically referred to as sodium bicarbonate is a white alkaline powder that has proven its potential in curing several health conditions including stomach ulcers. In ulcers, it is commonly noticed that the stomach is completely filled with stomach acids and the inner lining of the wall is corroded due to acid.

When baking soda comes in contact with the acid, it neutralizes the acid, and as a by-product of this reaction, water is released. This is the first step, as the acid gets converted, the bacteria are then exposed, and apple cider vinegar that is a proven antimicrobial agent acts on the h pylori bacteria, and thereby prevents and cures stomach ulcers. Although there havent been any studies that have concluded on these claims, however, there are several anecdotes that claim the efficacy of this solution.

How Much to Use?

Raw honey is very helpful in treating peptic ulcers. Plus, honey reduces and soothes the inflammation of the stomach lining. For best results, you can take raw honey daily in the morning on your empty stomach. It will help treat and prevent stomach ulcers, cleanse the bowel and boost the stomach lining. There are a lot of other natural home remedies for peptic ulcer presented in this article, so keep reading it to learn more!

Black night shade , known as Mokoi in Hindi and manathakali keerai in Tamil is a medicinal herb that has great curative effects. It has a soothing effect on the stomach and gives instant relief from the burning sensation caused by stomach ulcers.

Black night shade greens do not have any side effects and can be used as part of your cooking. Consuming them raw is more effective as it loses part of its potency when cooked.

Start A Diet Rich In Fiber 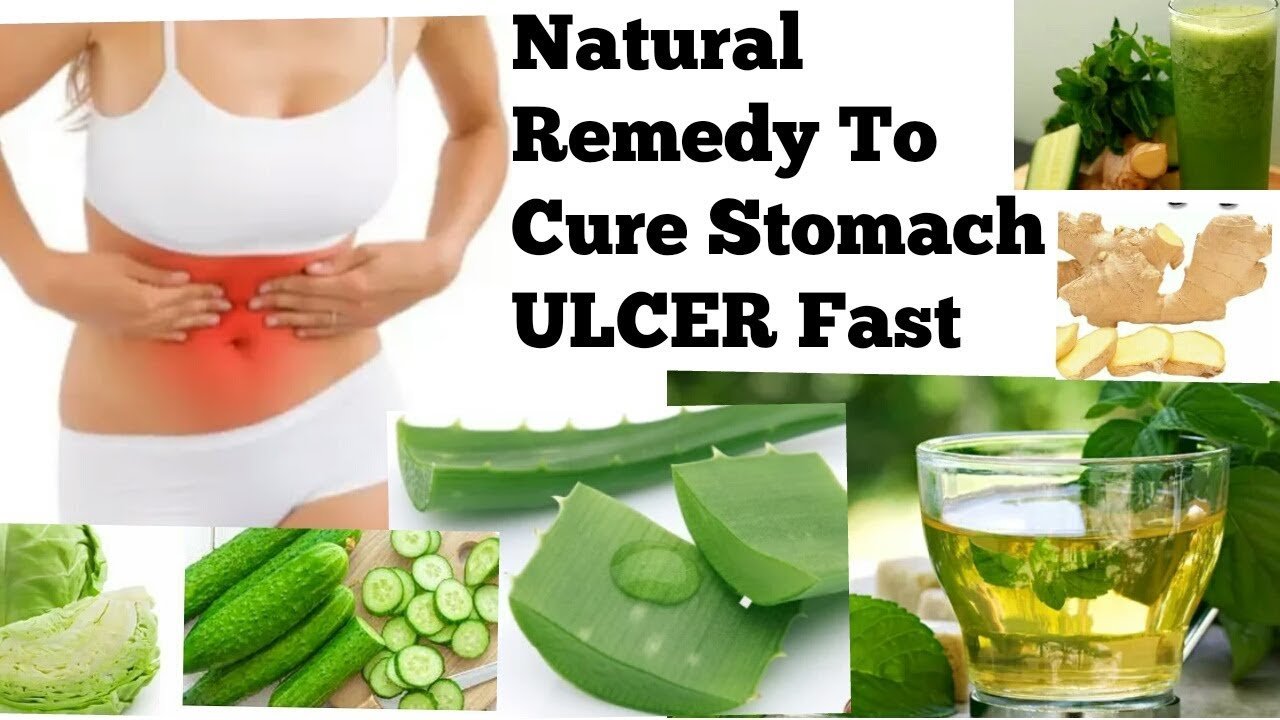 Eating foods rich in fiber may also be helpful for maintaining a healthy digestive tract and reducing stress on your stomach lining from food sitting there longer than necessary.

You May Like: How To Slim Down Stomach In 1 Week

Signs And Symptoms Of Stomach Ulcers

If symptoms persist, see your doctor because you may require prescription antibiotics or other medication. Over-the-counter options can provide temporary relief, but there are also natural remedies for ulcers to consider.

Ulcers form when digestive juices damage the walls of the stomach or small intestine. If the mucus layer gets too thin or your stomach makes too much acid, your gut will feel it. The two major causes are:

Most Effective Natural Home Remedies For A Stomach Ulcer Painrelief

Gastric ulcer is treated with antibiotics and drugs to reduce and block stomach acid. In addition to this proven treatment plan, many studies have shown that there are also a number of helpful natural home remedies for a stomach ulcer pain relief. So, patients with stomach ulcers can completely choose to use these home remedies for a stomach ulcer because they are very simple but effective, and anyone can apply them without too much cost. Lets check out on TrueRemedies.com!

Honey is far from a sweet addition to your drinks. While refined sugars and most sweeteners should be avoided for ulcer healing, raw honey is an exception and has unique benefits. Honey contains an enzyme called glucose oxidase. This enzyme is known to produce hydrogen peroxide, which can help fight the bacteria responsible for causing peptic ulcers.

Depending on where it comes from, honey can contain up to 200 elements, including Polyphenols and other antioxidants. Honey is a strong antimicrobial agent and has been shown to inhibit the growth of H. Pylori bacteria . As long as you have normal blood sugar level, you can enjoy honey as a sweetener to soothe your sores at home.

Note: You should take this liquid right after getting up and before having breakfast.

Repeated burning pain in stomach is an indication that the person is suffering from peptic ulcers. Peptic ulcer is a health condition when open sores develop on the inside lining of the stomach and the upper portion of the small intestine. It is an infection, which is mainly caused by the Helicobacter pylori bacteria. H pylori are spiral-shaped bacteria that damage the mucus coating, which is present in the body to protect the lining of the stomach and duodenum.

Also Check: What Will Help With Stomach Pain

Other Options For Pain Relief

Painkillers aren’t the only answer for many of life’s aches and pains. Many effective and safe alternatives don’t have any side effects at all.

So remember: Pain relief doesn’t only come from a pill bottle.

Why Is My Stomach Bloated All The Time

Why Is My Stomach Bloated All The Time